and it came to pass that the furniture was removed

Wee Man and Miss O share a room. It used to be that Wee Man and HB shared a room, but we discovered that HB was not a Good Sleeper At Night, such a Not Good Sleeper that he would wake up two, four, sometimes ten times a night in a screaming rage that very nearly melted the paint off the walls. So we moved Wee Man's crib into Miss O's room, and all was well until Wee Man decided to be a goat and scale the sides of his crib. Grandpa dug the bunk beds out of the garage attic, and that was the beginning of the madness.

At first it was just once in a while, they'd have Shenanigans at bedtime, and laugh and holler and carry on. But hey, they're kids, and they're Sibling Who Like Each Other, and why not milk that as long as possible? That, my friends, was the top of the slippery slope. I see that now, as we are sitting at what is maybe the bottom of the slippery slope, but probably is not actually the bottom. Then the children began turning on the lights in the room and looking at books (the lights were unplugged or removed), and then they began dismantling their beds. For a while, there was a pillow on the floor, then all of the blankets, and then blankets and sheets, and then all of the bedclothes from both bunks and the mattresses. They pulled both mattresses off of the beds, even the top bunk. While I would like to commend their dedication and perseverance, I have managed to restrain myself.
They were warned: We will remove your bunk beds if you do this again and you will Sleep On The Floor. They abandoned the bed strategy, and moved on to the bookcase and the toys. Again, they were warned: We will take away all of your books and toys.

Saturday morning, we heard the kiddos awake and playing. Wee Man came in our room, told us he was hungry, hungry, and went back to play with Miss O. There were no catastrophic noises, no unusual sounds, nothing to prepare us for what we would find.

There were mattresses everywhere. Sheets everywhere. The toy box had been dumped out and scattered everywhere. The entire contents of the bookshelf were mounded on top of one mattress, and Miss O had one foot sort of stuck under the pile of books poor me, look what that naughty boy did style. Someone had taken a pencil and someone else had taken a green-blue Crayola and had created a mural on the back of the door, the walls, and on the actual bed frame.

I turned around and went to brush my teeth, because I Needed A Minute. Actually I think what I needed was Maker's Mark neat, make that a double, but that is not Something We Do At 8 In The Morning. After some minty fresh Crest cleared the fog that was my mouth and my brain, I went to face The Monsters, who now were sitting on the mattresses reading books as if they were Pleasant People.

Wee Man: Hi Mama. What doin' today people?
Mama: Well, people, we are taking everything out of your room except the mattresses.

"You are the WORST PARENTS EVER!!!!!" (That one made me smile. I received an email from a dear friend about the worst parents ever, and I felt truly honoured to join their ranks.)

All this was from Miss O, who still claims she had no part in the goings on. You can't see my face as I write this, but I have the "There Is No Way That Is AT ALL Possible" face on.
Miss O was grabbing parts of the bunk beds as they were carried away, and being dragged down the hall with them. She tried to wrestle books out of my grasp. She was punching, slapping, and being just like the little girl with the little curl. There was a little girl who had a little curl right in the middle of her forehead. When she was good, she was very, very good. And when she was bad she was horrid. I had never seen such tremendous behavior from my sweet.

And poor Wee Man, he was terrified. Which is interesting, because there was no yelling or even talking from us. We just kept our traps shut and ignored Miss O's attempts at baiting us. He cried and cried, laying on top of his blankets to protect them. "Cuh-lease no you take my Beloved. Cuh-lease. No you take my blankets." We didn't. That would be crossing a respect line that would erase any credibility we had.

So now their bedroom looks like this (except the bathrobe is no longer hanging by the bookshelf): 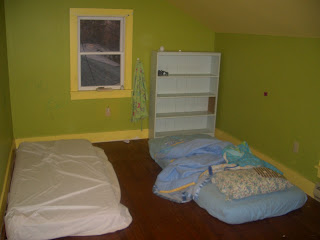 The fray had a lull while the children ate breakfast, except for Miss O who was not going to eat if she couldn't have her bunk beds, say it with me people: whatever! Then it was nap time. They were instructed to lie down and have a rest. What they actually did was completely idiotic. They ran from one side of the room to the other and smashed themselves into the wall. For over two hours. I swear we do not feed them any sort of brain-altering drugs, legal or otherwise. Not even speed, which is what you'd have thought we gave to them, from the sound of the thunks of their feet as they ran speedy quick across the floor.

And the inevitable finally did occur: When the children are angry, their most effective form of parental punishment is to Pretend The Floor Is The Toilet. Miss O Oops I Sort Of Had An Accident Dayton and Wee Man Sis Take My Bi-per Off And I Poop On Da Floor Dayton struck again. Fortunately for me, The Mister was home to handle poop patrol, and Miss O is used to Sort Of Cleaning Up After Her Sort Of Accidents.

They are still sleeping on the floor. They haven't earned their beds back yet by demonstrating appropriate behavior at sleeping times. Hopefully they will be back in beds soon, because I tell you what, my back is just about falling off me from sitting on that cold floor reading to them.

Again, I must say: The tall will prevail.
Posted by Pamela at 12:17 PM

Email ThisBlogThis!Share to TwitterShare to FacebookShare to Pinterest
Labels: riding herd, there it is