so here's the scoop.

I know you all have been just DYING TO KNOW why I haven't actually written a real, live post in like a hundred years.  And here's why:
I had a migraine.
It didn't start off as a migraine, well, maybe it did, ON FATHER'S DAY, when I had a Random Spontaneous Outbreak of Migraine that caused me to pretty much pass out at the kitchen table.  Well, not PASS OUT, pass out, just the sort of PUTTING MY HEAD DOWN ON THE TABLE AND INSTANTLY FALLING ASLEEP variety of passing out.  It was awesome.
Heh. Or not.
Eventually the migraine portion of the headache went away, and just the annoying headache portion of the headache remained.  And I am TOTALLY used to that nonsense, because I have a headache pretty much 29 out of 30 days a month, except February, and then I'm 28 for 28.  Unless it's a Leap Year and then I'm 29 for 29.
A statistical oddity. (name that flick)
Never mind.  The one I was thinking of was "geographical oddity".  So name *that* flick.
And then I got sick.  I'm not sure what sort of sick it was, but it involved a fever for days, and lots of gross boogers, and coughing and sneezing and sinus pressure and allergies.  And ear pain.  Lots of ear pain.  So after three weeks of that I went to the doctor, because it OBVIOUSLY wasn't one of those Standard Ten-Day Viruses That Could Be Waited Out.  And the doctor told me I didn't have strep (right, sore throat, too, and lost voice) and that I should go home.  So I did, but later in the weekend when I was feeling WORSE YET, I called her back to get The Drugs.
Which, for the first time in the history of EVER did not give me a yeast infection.  You're welcome.  I know you were dying to know that.
Oh, and the boogers?  Were so bad that the buildup of crusties on the inside part of my nose piercing pulled the piercing INTO MY NOSE.  Because there was CLEARLY NOT ENOUGH CRAP IN MY NOSE.
Blah. Blah. Blah.
And then I had another migraine that lasted about 3-5 days, and was completely debilitating for at least 3 of those days.   I just can't even make fun of that.  I'm sorry.  I've tried and tried to find some sort of smart-assed thing to say about it and I just can't.  You'll have to be satisfied with the sarcastic remarks about boogers and yeast infections, because that's all I have, people.
So I got the migraine prescription medicine, and I took it because I seriously thought my brain was going to implode and I was going to leave my short people motherless.  I am not too worried about The Mister in that scenario, because he's lovely and charming and women are always falling all over him (although he will probably deny that because his momma done raised him right), and you can totally replace a wife, but a mama? Not so much replaceable.
Oh. My. Word.  I astound even myself sometimes.
I took the migraine meds even though they are contraindicated for both breastfeeding and my crazy pills.  And I did not go to the hospital when the doctor told me I should go to the hospital because I'm stupid stubborn, or because it's just too much work to find someone to come mind mah babehs at 10 p.m.
Anyway.  My head still hurts.  I need it to stop hurting.  Suggestions? Ideas? Cheap narcotics?
What are you up to?
Posted by Pamela at 12:00 PM 5 comments

Email ThisBlogThis!Share to TwitterShare to FacebookShare to Pinterest
Labels: hot wives are hard to come by, is it happy hour yet?, legal addictive stimulants, where does this even go?

I had the awesome opportunity to spend the day in last Wednesday with some fantastic mama bloggas and their babies. We took part in Do Good Day, a nationwide event hosted by 77kids and The Motherhood.
77 Bloggers got together in eleven cities across the US to... wait for it... DO GOOD. I am proud to be a part of Team Syracuse. Nicole, Clarissa, Danielle and I, along with our MANY children, met at the Greater Syracuse YMCA and got to hang out with the supercool YumMobile.


We helped hand out treats to the families who were going to class, and distributed the very special Pay-It-Forward dollar bills to anybody who'd accept one. Each dollar bill was inside a note that gave seven suggestions for something lovely to do for someone else for free, and another seven suggestions that cost just a dollar. People couldn't believe we were handing out money... some of them looked at us like we had three heads!
I wasn't entirely sure how we were going to keep the short people occupied and blissfully entertained whilst Doing Good, so I brought a box of sidewalk chalk.  I figured we'd be set for a good hour.  And we were.

Clarissa treated us to lunch at a local pizza joint, then the whole lot of us headed on over to Wegman's. (And if you don't know what Wegman's is, you should seriously just pack your entire house and move to Western New York. Trust me on this.)  There, we picked up a huge sandwich tray, and a fruit tray and some yummy sweets for the mamas and daddies who are staying at the Syracuse Ronald McDonald House.

We delivered a lovely dinner of sandwiches, and over a hundred dollars worth of much-needed cleaning supplies to the Ronald McDonald House of Central New York.  The lovely ladies were so happy to receive the trays of food and boxes (and boxes!!) of supplies we had purchased.  As we were telling them about the other things we had been doing, we pulled a handful of the Pay-It-Forward dollar bills, and offered to leave some at the Ronald McDonald House for the parents who were staying there.

And now, the fine print:  I was compensated for being a part of Do Good Day.  But nobody, and I mean nobody, can buy my integrity. So there.
Posted by Pamela at 9:16 PM 3 comments

billboard of the week. women's and children's hospital of buffalo edition. 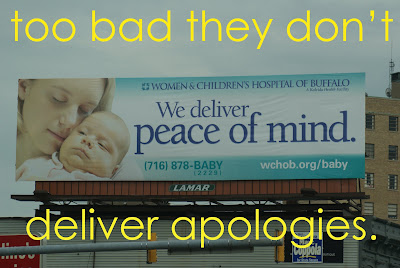 carnie??? or not a carnie??? that's the question, here's the answers.

OH DANG!!! Not only does Danae have made skillz, MichelleK also has mad skillz.
Danae gets the taffy, and MichelleK gets to go shopping in my Home-Canned Heavenly Closet.
MichelleK emailed me and I totally forgot and that is sucky.
And I'm sorry about that.
Danae had the mad skillz.
She correctly identified every person.
And she gets the salt water taffy.
But here's the thing, people.
We're all just people here.
And sometimes, we aren't looking hot.
Sometimes, we leave the house in grey and white striped pajama pants
and a bright purple tank top with crazy print on it.
And at the end of the day,
we all want to be treated with kindness.
We all want to have a full belly.
We all need someone to love us.
Carnie or not. 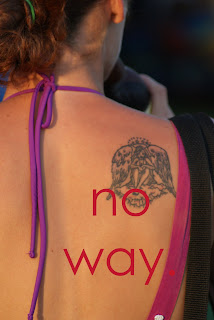 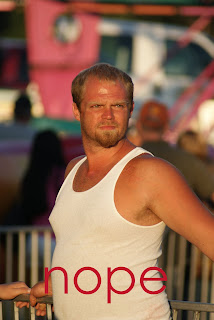 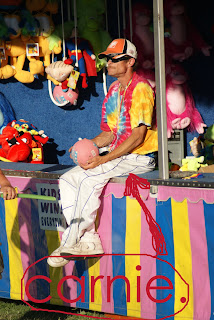 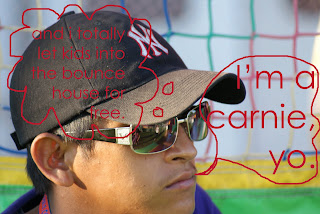 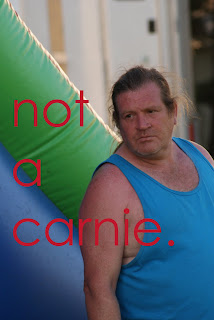 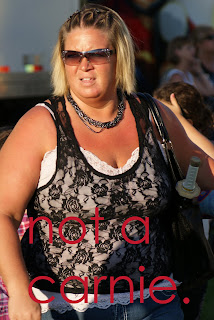 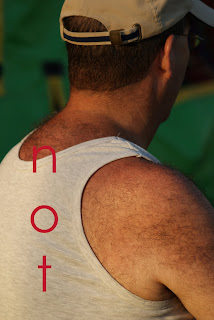 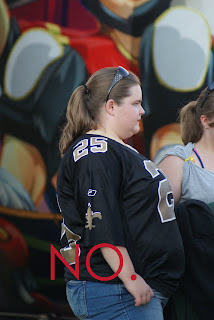 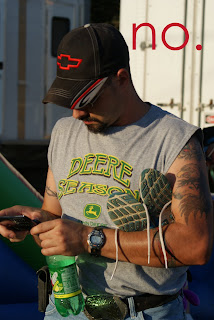 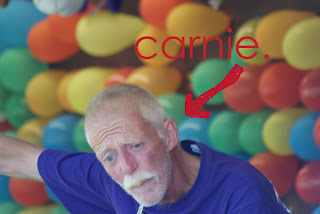 Sorry it's taken so long to get this posted.
I wrote a post Saturday morning that has generated a huge amount of traffic,
and huge traffic begets huge amounts of email and comments,
and tons of email and comments take a lot of time.
Who knew?
It looks like things might be chilling out just a bit.
We are now returning to our regularly scheduled programming.
Posted by Pamela at 11:07 AM 10 comments

Email ThisBlogThis!Share to TwitterShare to FacebookShare to Pinterest
Labels: free stuff, there it is

breastfeeding is not a sex act. 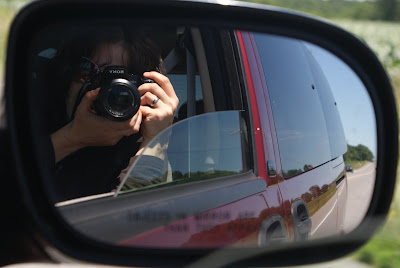 Email ThisBlogThis!Share to TwitterShare to FacebookShare to Pinterest
Labels: hot wives are hard to come by

snapshot of the interwebs...

Here is a tiny peek at the noise we're making about the rude employee at Women's and Children's Hospital.

***UPDATE***
This story has made it to BABYCENTER!!! And oh, my word, 267 comments there.
Jessamine's story also showed up in a chat here.
Also, close to 1500 people have read about what happened to Jessamine and sweet Hazel here on my blog.  Thanks to everyone who left the lovely supportive comments here.  You're not just sharing kindness with Jessamine and Hazel, you're supporting breastfeeding mamas everywhere.
***end update***
pameladayton@BreastfeedingM check this out. http://bit.ly/b3SywF

Circular LogicThis story has made me reflect on my own public nursing experiences. A year ago you couldn't have c...#
PamelaMy experience with Children's was NOT-VERY mother-child friendly either. No actually it was VERY-NOT...#
Loraas someone who is offended when she sees someone FORMULA FEEDING their baby, I am trying to sympathi...#
obnurse35yrsMy letter to the head of lactation services: Kyle Brach RN, BSN, IBCLC I have seen the many on-line ...#
Kim L.My jaw is on the floor. How completely, totally sickening that someone had the gall to tell that wo...#
JoI am sure she was totally topless and all hanging out right, 'cause that's certainly how I breastfee...#
marmetInfuriating! At a hospital, of all places, you'd think they would know better. I had the opposite ...#
NicoleSent this to http://www.wchob.org/contact/contact.asp: I recently became aware of a mother being ha...#
Pamela@Sardine Mama ~ I did, actually. They seemed interested, and said they were going to investigate. @...#
ramI am astounded...well, maybe I shouldn't be really in our society. That is way past unacceptable fo...#
Irish GumboPretty much speechless...especially given the context. What was that receptionist thinking? Wait, sh...#
AmberGah! This is horrifying. Also, if there's anyone who SHOULD see breastfeeding, it's children. Becau...#
StandardSpicyWhatnotIf I hear of another person complaining about nursing because 'children are here' I'm going to have ...#
Farmer's DaughterI would love her to say something like "I am feeding my child. Stop projecting YOUR perversion ...#
foodiewithfamilyI think maybe the nurse should try covering her head with a blanket while she eats dinner and see ho...#
Sardine MamaEffing WOOT!!! So, you've called the local news station haven't you? Seriously.#
BoobiesNBabiesWell, even though I got the wrong day in there...I hope they get the message, along with any others ...#
The Stiletto MomWow. Just wow. Good for your sister for standing up for herself!#
Pamelaoops... it was Friday, not Saturday. i am fabulous for not knowing the actual day of the week. toda...#
BoobiesNBabiesComment submitted on hospital website http://www.wchob.org/contact/contact.asp : I recently became ...#
JenI think, the fact that people are offended by a breastfeeding mother reflects very badly on our soci...#
foodiewithfamilyGo, Pamela! You know what my sister told me when she shared the story with me? "At least thi...#
unmitigated meNOW I've heard everything there is to hear. What is WRONG with that place???#
Posted by Pamela at 1:44 PM 4 comments

Email ThisBlogThis!Share to TwitterShare to FacebookShare to Pinterest
Labels: there it is
Newer Posts Older Posts Home
Subscribe to: Posts (Atom)