This is how we do nesting at the Dayton house.  Because honestly?  I'm not the Cleaning Until Uterine Explosion Type.  I am interested in Other Things.

Item 1, the adorable skirt for the adorable girlchild.  I had a bunch of this fabric laying around, and decided it would be a cute skirt.  So I thought about it, and then I made some of it into a skirt.  A Twirly Skirt. 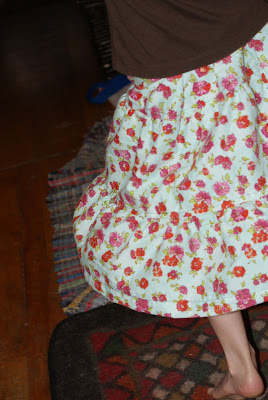 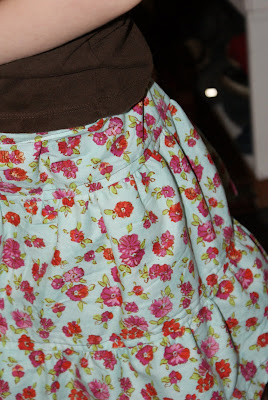 Item 2:  Friends of ours just had a baby this week, and so I made a personalized baby blanket.  I do understand that baby blankets are not always the most useful gift, however, a second baby needs her (or his) own blanket.  They just do.  It's like a rule or something, at least in my house.  Kind of like the "No Sharing Combs, Toothbrushes, or Drinking Glasses Rule" that some people have. 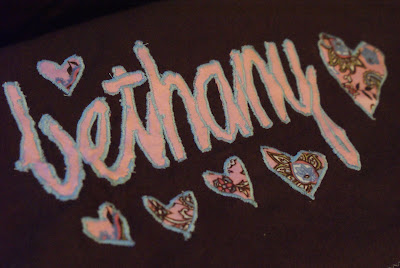 I was super excited when I went to JoAnn Fabrics (the only fabric-peddling store within miles of where I live), and discovered that they actually have (gasp with me) prints that aren't barf-inducing.  I have had a difficult time shopping at Joann's for pretty much ever because their choices in fabrics that are not solids or calicos have been chronically lame.  But the last few times I have had crazy success like I had never known was possible.

Also, this is the first time I've used my sewing machine to embroider around applique, and I would give myself a grade of B-.  It's not pro-quality, but I'm not pro, so whatever.  It's on the funky side of things, and it will be swell. 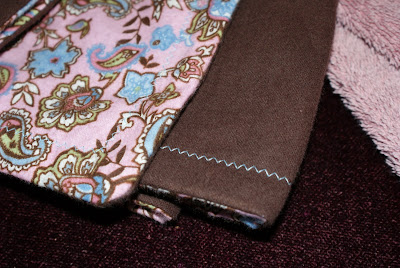 And finally, here is Wee Man, trying out his bwand new Bewoved bwanky after I patched that wretched thing into Life #2.  It was a lame, light-seeping-through, vile and filthy piece of blanket and now it's BRIGHT!  and COLORFUL!  and most importantly, EASY TO FIND WHEN MISPLACED!!!!  I haven't cursed Beloved all week, because I can spot that guy instantaneously. 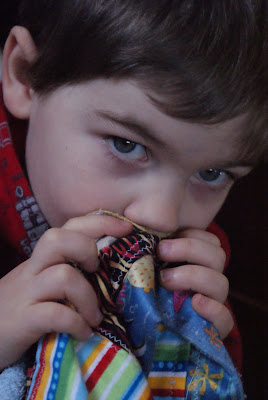 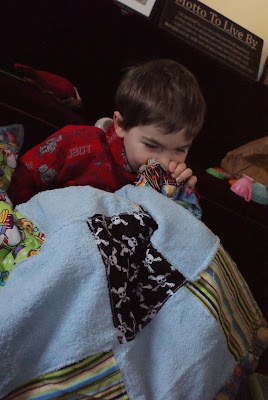 And heck, yeah, that's some skull-and-crossbonages on the Beloved Blanket.  Because that's how we roll here.  There's also some crazy flame material.  Because, as Wee Man pointed out, My Daddy wikes da fwames so my bewovey should have dem.  How can you argue with that sort of reasoning?  You just can't.  And I do realize that speech therapy is probably in that kid's future, but for now he's just too stinking cute for me to actually care.
Posted by Pamela at 9:39 PM