It's the Bloggy Prom Weekend, hosted by the lovely Jen from Blissfully Caffeinated and The Stiletto Mom from, uh, well, The Stiletto Mom.  I love obvious.  It keeps me from having to understand irony.

Excuse me for a minute whilst I have a heart attack and a stroke and count my grey hairs...

That was an awful minute for me just then.  And all of you older folks :cough:Stiletto:cough: just shut up and pat me on the back in an understanding fashion.

Seth was a very exciting boyfriend for a number of reasons.

I'll skip right to the end for you, so I don't keep you all waiting.  At my graduation party, Uncle IKnowThings, my oldest brother who is younger than me but remarkably everyone who meets him believes him to be much older than me (heehee), took Master Seth to the basement of our house and showed him the gun cabinet.  He told Master Seth to choose the gun he'd like to be shot with, if he ever showed up again, or touched me, or continued to see me.

Anyway, here we are, in all of our resplendant prom-ish glory: 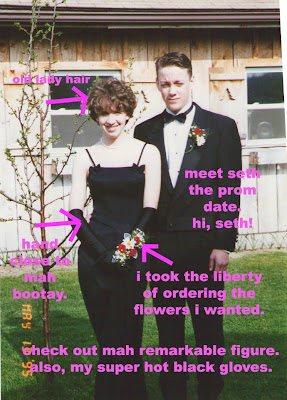 I am pretty sure it's the sun here,
but I recall he scowled quite a lot.
And because I was young and innocent,
I thought he was wicked hot. 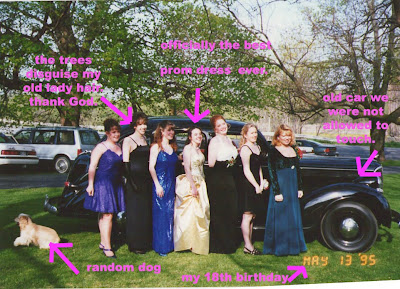 The "Look At Us Being Super Fab Next To The Old-Timey Car" pose.
Except nobody said Old-Timey in 1995.
Or Super Fab.
Those were the days. 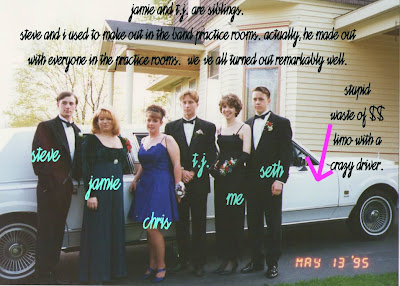 Because we were SENIORS
(WOO HOO!!! SENIORS RULE!!!),
we traveled in style.
*****OR*****
we were all such abominable drivers,
our parents were happy to chip in for a limo.
We didn't even consume naughty beverages.
In the limo. 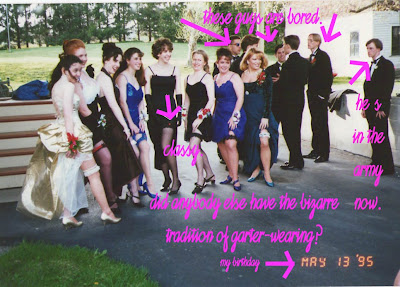 The requisite garter picture.
That's me in the middle.
I swear to the Almighty, I HAD to put
that thing a-waaaaayyyy up there.
The slit on my dress was high.
And I have a long torso.
Which that made the slit even higher than intended.
I was NOT allowed to be a whore in high school.
Honest.
Also, I'm curious.
Is it just New York schools that have the prom garter thing?
Or do other places have this odd custom?
We went to a restaurant on Lake Ontario (far, far away) for a fancy dinner, and then rode in style back to our school to dance the night away.  Afterwards we went to a fantastic party at Jamie and TJ's house straight home to bed like good little children.  It was tons of fun.

Be sure to head over to Blissfully Caffeinated and The Stiletto Mom to check those hawt babes out.  If you want to join up with the Prom-A-Palooza Tour, leave a comment on either of their posts.

Email ThisBlogThis!Share to TwitterShare to FacebookShare to Pinterest
Labels: is it happy hour yet?, where does this even go?