Any ideas how much the ensembles in this photo are worth? 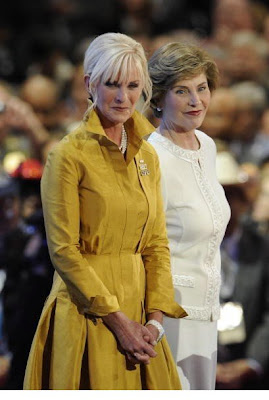 Now, I'm not saying that if you're filthy rich you shouldn't have nice things. Or hundreds of thousands of dollars in the blingety-bling draped around your wrists and neck, and dangling from your lobes.

I'm just going to say that the Habitat for Humanity affiliate in my county could have built almost seven houses with $317,000. For that crazy(?) amount of money, seven working families could own their own home, and be working themselves out of poverty instead of riding the spiral downward.

$317,000 could purchase 63 Gift Arks from Heifer International. What's a Gift Ark? One Gift Ark provides two cows, two sheep, two oxen, two camels, and two water buffalos to five families across the globe. Each of those families share the offspring of these pairs with neighbors in their villages, helping one family at a time become self-sufficient. 63 Gift Arks would provide 126 of each of the five animals, a total of 630 animals helping 315 families.

Is it, Senator McCain? Really? Because something tells me that when you spend like that, you know, all big-spending, me-first, country-second style, I think you just may not be in touch with what's going on around you. We like to call that REALITY over here at the dayton time, and I cordially invite you to get yourself a big old helping of it.
Posted by Pamela at 10:53 AM