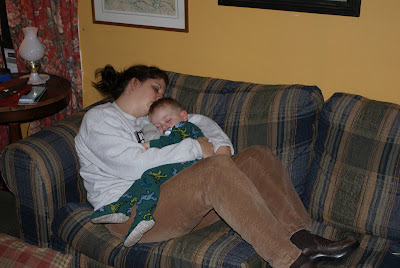 Poor baby. Poor mama. Poor Sis. It seems we have drawn the short end of the stick as far as non-life-threatening illnesses are concerned. Two weeks ago, it was the barfing flu. Now? Hand, Foot, and Mouth Disease. I do not have the HFMD, but my oldest and youngest do. And Wee Man? Well, he's just annoyed that he's not getting any of the yummy Motrin. And to that, I say, Whatever, dude.

The Mister took this picture Monday night around 11:30, after HB woke up crying for the umpteenth time. We were tired.

The doctor said we should keep the kiddos at home until the blisters aren't active. Blisters? Oh yes. You must not have clicked the link to the CDC website. It's all about the blisters, baby. And keeping them home? Means...

We might have to miss out on the trick-or-treating. And that? Would totally not ruin my day AT ALL. I would rather hit the grocery store for a few treats, stay home and watch a movie than trudge around in the snowy mud with a bunch of weirdos in costumes.

But that's just me.

And speaking of just me, would it be really, REALLY wrong to dress up as Bristol Palin for Halloween? I haven't been able to think of any other pregnant people. And I think I could pull it off.
Posted by Pamela at 11:47 AM

Email ThisBlogThis!Share to TwitterShare to FacebookShare to Pinterest
Labels: is it happy hour yet?, riding herd