do you miss me?

This guest posting thing was a brilliant idea.  I hope that you all have been having as much fun reading the posts as I have.  Jason's post actually made me snarf my coffee, and it was all stuff I had written.  I am such an easy room sometimes.  And poor WRH, who had such anxiety over her post she found it necessary to post drunk.  Funny, though, that she considered making up a story about teaching Elliott French.  My MIL, a retired French teacher, is already on that.  All of my children have a basic understanding of French, and when we are out in public and want them to hop-to in a hurry, we order them around in French.  It's pretty sweet.  Also, I think Amelia Bedelia is a moron.  That's why the dayton time + WRH = true love forever.

Jen from coconut belly hit the nail on the head with her comparison of first vs. fourth... and she only (I don't mean only... ummm, errrrr... moving on) has two kids!  But that's probably because fourth is only a little different than second... just more poop.

I will admit that I was sort of surprised Irish Gumbo posted about toast, but also sort of not surprised.  I am being completely somewhat honest with you when I say he sent me about 6 emails a day the week he was enjoying the loaf of bread I sent him, and I was starting to think he and Steenky Bee were team stalking me, but he totally chilled out after the bread was gone and started acting all normalish again.  And The Now-Infamous Steenky Bee Post?  Woah, man.  I had no idea The Mister was taking this whole guest posting thing so seriously.  Don't worry, they're totally all BFF and whatever now, there's really no bull-puppies or hating going on in real life.  It's cool.

What's not cool is the large crumb from my pizza crust that just went to live under my right arrow key.  Not.  Cool.

But I am guessing you don't want to hear about my booger coffee, or how funny I think I am, or any of that stuff and nonsense.

I'm guessing you might want more baby.  So here you go: 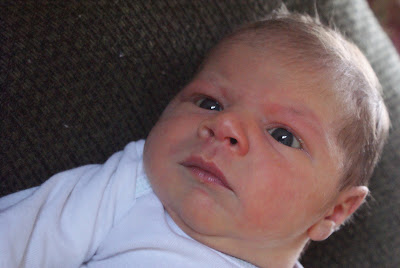 Being a chill baby is serious business. 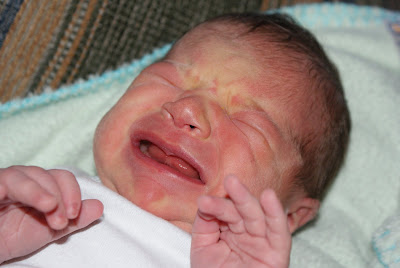 We've only seen this face a couple of times.
That's why I recorded it for posterity.
I wanted visual proof that he cries. 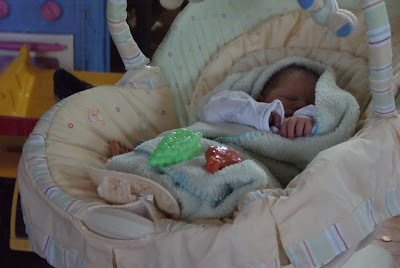 The baby buffet.
HB thought Elliott was hungry for some real food.
The baby not like the milk.
As if. 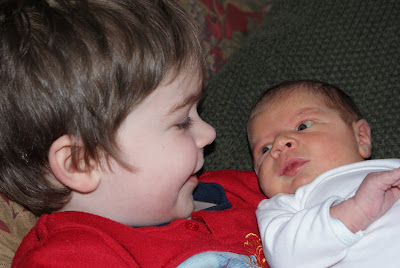 Elliott and Wee Man just sit and stare at each other.
Gazing lovingly.
How long will that last? 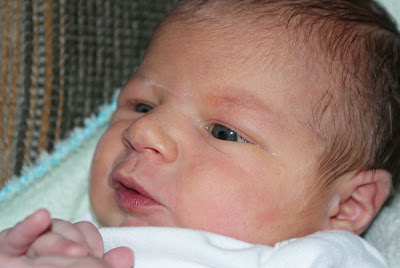 This is mah sweet baybay.
He's a lovey.
Posted by Pamela at 2:29 PM